It's the end of the world...and I feel fine! 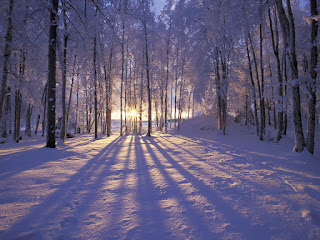 We have been celebrating winter solstice-December 21st, the shortest day of the year- as a nuclear family for many years now. Its a quiet day just for us and we leave December 25th for my parents' traditions and extended family.

This year is a little different- we built a labyrinth in the backyard. I love it. I walk past every time I leave the house for the car and every time I come home again. My metaphorical spiritual path is much more in my awareness when my physical representation is right there all the time! 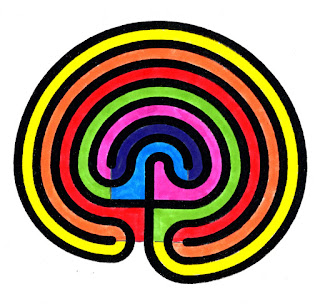 So, partly with those thoughts, I started reading 'the stuff' about December 21st. In 2012.

It's the end of the world! It's the second coming! It's when earthlings will make contact with aliens! And if we live through all of those predictions, it's the beginning of a New Era.

I suppose my reading should have, at best left me jaded and, at worst left me fearful or scared, but it did neither. I feel FINE! In fact, I feel ELATED! What a relief! Maybe we can get past the end of the world language. Maybe we can move past it and into whatever this New Era will be.

I was born in 1971. For as long as I can remember the world was ending. I grew up with the Cold War and then the beginning popularity of environmental awareness- the end of CFCs (who knew my big hair in the 1980's/ hairspray was killing the earth?) and the beginning of popular recycling and various environmental reforms.

But... before we had time to collect ourselves, everyone was carrying on about Y2K. The world was ending because the digital world we created wouldn't be able to cope. We lived past the clicking dial of December 31, 1999 and so did our ATM machines and PCs. We saw January 1st, 2000 and so did our extra supplies of bottled water and canned food.

I know we are hardly past the threats to the earth. I know that threat of the escalation of conflict (used to be called war) and the threat to the environment exist in this moment while I'm writing. In both areas things have not come far enough fast enough and threat is still there. I don't minimize the important issues that require attention and advocacy, but I don't think that they are likely to kill us by any instant dramatic means either.


And so there is something about the anticipation of December 21,2012 that leaves me relieved and hopeful.

At the very worst anything bad will have happened and we'll be dealing with it. At the best, the sun will rise on the 22nd and things will look relatively the same (most likely scenario!). The governance model of the planet won't have changed. We won't be ruled by aliens. And we won't have disappeared- wafting away in smoke as the last day of the Mayan calendar has passed.

What will have happened is simply that we will have survived another numerical designation of our doom. Will the problems all be solved? Of course not. However, we will have arrived at another important milestone in our collective human history. We will have lived to say: "I survived the end of the world."


I'm elated, perhaps in part, from ignorance. I don't know of any other markers coming in my lifetime that are predicting the death of all humanity as we know it. The December 21, 2012 prediction was a bit of a left over from the turn of the Century in my view. We made it through. That's it people. Now it's time to just live.


I'm also elated because it brings all those bits and pieces in my own life back into perspective. Who the hell cares what is clean in the house and what is not if the world is ending?

A:  Love.
Being enough.
Knowing that I am, and all the people I love are... Enough.

There are no children that need teaching, molding, changing. There is no husband who needs to hear me or do this or that. There are no imperfect relationships in my life. And really everything else is just non-sense.

If it's the end of the world as I know it? Well, I feel fine.

Let's start anew. If you're still here on December 22nd and things are pretty much as they are now, consider committing to these ideas:

1. There is nothing that needs to change in my life.

2. I love who I am and where I am at even though it's imperfect, messy and not exactly like a picture from a magazine/ movie/ Facebook.

3.  I will share with the people around me the authentic person that I am and not some image of the person I think they will accept.

4.  I will accept *all* people around me as they are and love them for their effort without judging them for not being the image I want them/ need them to be.

If that brings us to a New Era, one that will be seen 2000 years from now as turning point past the domination of individualistic thinking and one that begins radical self-acceptance and community-oriented thinking, that's the best 'end-of-the-world' gift I can imagine.

Because it is only when I consider myself, others and my planet with acceptance and compassion that I can truly influence anyone or anything.

Whew. Truth! Let's move on, shall we?

Point on the Path

Promote Your Page Too